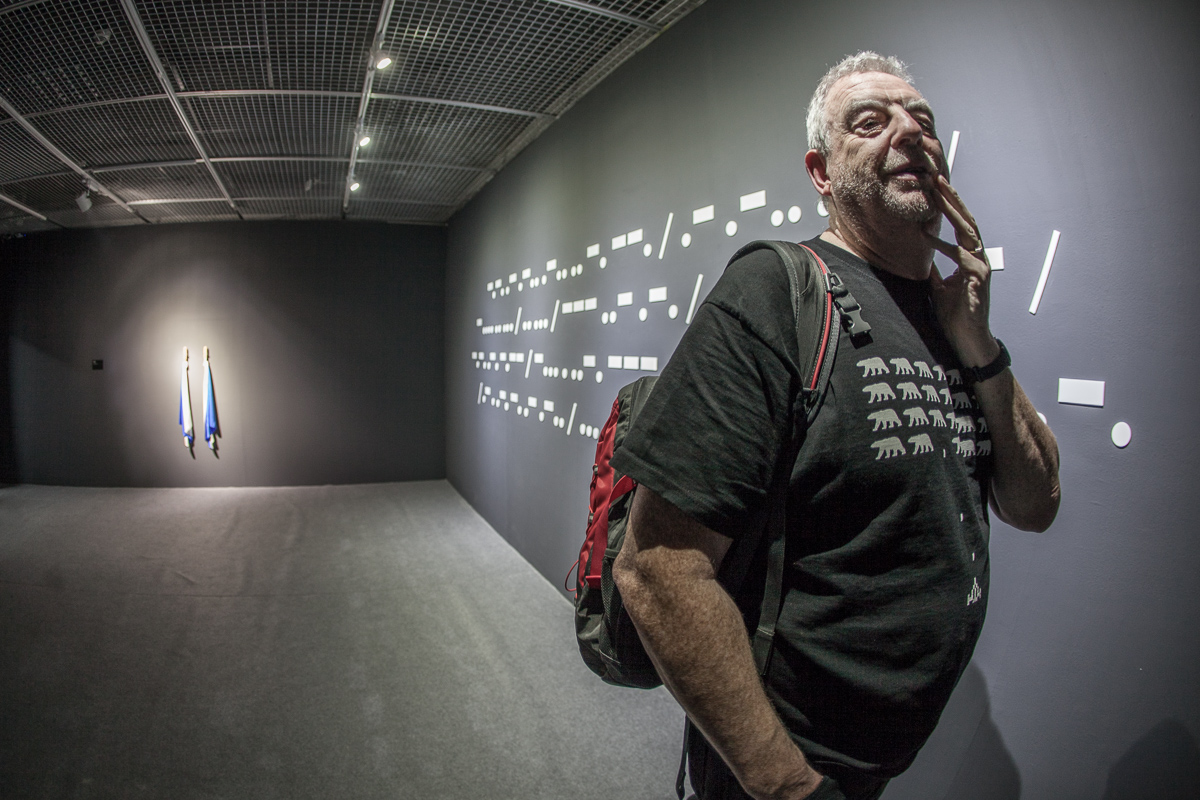 Chris Wainwright was a giant not just in stature, but in intellect, creativity, resourcefulness, humour, and compassion.  He was and will remain an inspiration to many through his awesome body of work, and how he interacted with folk to bring out their best.  He gave me so many opportunities, and i got to travel to places with him I would never have got too.

I first met Chris whilst working as a web nerd for Cape Farewell, where he was Chairperson of the organisation but also curator, artist and expedition member.  The first time we actually talked, was at a party of a friend Michèle’s in dentist surgery. It was on the same night a drinks do for CF.  Which we both separately ducked out of early to go to her party.  Bumping into him on the stairs of this dentist and this is the first convo we ever really had – went something like this:

A few years after, we were in Taipei installing his Solo exhibition First And Last at the Museum of Contemporary Arts. We flew in long haul, got to our digs and went straight out with out unpacking to find beer.  We stumbled upon this Japanese joint and had what we both declared was the best-beer-ever, served in ice cold glasses and some sushi.  The next day we had to install this very complicated artwork which consisted of loads of dot and dashes and slashes to form a morse code message.  All of the elements had to be in the correct order and evenly spaced apart.  We both went a bit nuts installing that one, the combination of a hangover from the best-beers-ever the night before, and jet lag, meant that we were a sorry state trying to install it. But it went up and the whole exhibition looked fantastic.  We still would look back at that and laugh about how we managed to pull that off and if we would ever have the-best-beer ever again.

All of the projects we worked on would have some element of fun involved with. at the beginning of 2017 we installed an exhibition at the Today Museum Beijing entitled What Has To Be Done.  one of his works required him having to purchase a garden fork handle, for the rest of the trip that work would be referred to thus: “Fork Handle?” – “No Four Candles”  – in reference to the Two Ronnies’ Sketch.  I even made a fake work interpretation card which referred to that sketch.

More recently he had been turning his attention to DISPLACEMENT – and artistic intervention at international governmental talks about climate change imposed migration.  We got to work with some great people at the Nansen Project, and the artists involved where the best in their field, we where hoping to extend that project working with local artists in areas affected by climate change.  Climate change and the environment was a strand that thread its way through all of his work.

I always looked forward to our monthly curry night, where Chris, Anne, and who ever else was about would discuss art, education, camera gear, future plans, stories from the river and football songs.

My thoughts / love go out to his wife Anne – another amazing artist and thinker – they complemented each other perfectly as a couple, although I always said I would write a situation comedy on them one day! Also thinking of his family and all of his friends.

I would give anything to be having the-best-beer ever with you right now squire, 2 poppadoms each right?

The pictures below are a bit of a jumble but consist of missions to Geneva, Taipei, Hong Kong, Beijing, The Thames, Hermitage Morrings and some of the people from along the way.